USS Theodore Roosevelt (CVN-71) (also known by crew members as “The Big Stick” or within the navy simply as TR) is the fourth Nimitz-class aircraft carrier. Her radio call sign is Rough Rider, the name of President Theodore Roosevelt’s volunteer cavalry unit during the Spanish–American War. She was launched in 1984, saw her first action during Operation Desert Storm in 1991. She is currently engaged in a round-the-world deployment.

Initially, U.S. President Gerald Ford cancelled the order for CVN-71 in 1976 and substituted two  medium-sized, conventional-powered carriers that were expected to operate V/STOL aircraft. The existing T-CBL design formed the basis for the new CVV–serving as a replacement for the aging Midway-class aircraft carrier, while capable of operating all existing conventional carrier aircraft. This capability to operate conventional aircraft proved important as the hoped-for supersonic V/STOL fighters did not come to fruition at the time. In any case, construction of the proposed CVV medium-sized carrier never took place.

Authorization for CVN-71 was further delayed when President Jimmy Carter vetoed the 1979 Fiscal Year Department of Defense authorization bill because of the inclusion of this Nimitz-class nuclear super-carrier in the U.S. Navy’s shipbuilding program. Because of the international crisis that required the increased deployment of U.S. aircraft carrier battle groups to the Indian Ocean, President Carter reversed his stand on Nimitz-class nuclear super carriers, and CVN-71 was subsequently authorized under the 1980 Fiscal Year authorization bill for the U.S. Department of Defense.
Design and construction
Nimitz-class aircraft carrier

USS Theodore Roosevelt was the first aircraft carrier to be assembled using modular construction, wherein large modules are independently constructed in “lay-down” areas, prior to being hoisted into place and welded together. Modular construction, made possible through the use of a huge gantry crane capable of lifting 900 tons, cut 16 months off USS Theodore Roosevelt construction time, and the technique has been used on every aircraft carrier since. Roosevelt and those Nimitz-class vessels completed after her have slight structural differences from the earlier carriers (USS Nimitz, USS Dwight D. Eisenhower, and USS Carl Vinson) and improved protection for ordnance storage in her magazines.

USS Theodore Roosevelt‍ ’​s history began on 30 September 1980, when a contract was awarded for “Hull 624D” to Newport News Shipbuilding. Her keel was laid down on 31 October 1981, with Secretary of Defense Caspar Weinberger initiating the first weld. On 3 November 1981, Secretary of the Navy John F. Lehman announced that the carrier would be named for the 26th President of the United States, Theodore Roosevelt. 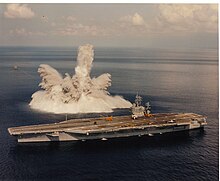 Shock test of USS Theodore Roosevelt during sea trials in 1987

After sea trials and pre-deployment work ups, USS Theodore Roosevelt started her maiden deployment on 30 December 1988 with Carrier Air Wing Eight embarked. The ship patrolled the Mediterranean Sea prior to returning on 30 June 1989.

On 28 December 1990, Theodore Roosevelt and CVW-8 deployed for Operation Desert Shield, arriving in the Persian Gulf on 16 January 1991. With the commencement of Operation Desert Storm on 15 January 1991, Theodore Roosevelt began combat operations; eventually flying over 4,200 sorties (more than any other carrier) and dropping more than 4,800,000 pounds (2,177,243.4 kg) of ordnance before the cease-fire on 28 February.

When Iraqi forces turned on the Kurds, USS Theodore Roosevelt and CVW-8 were among the first coalition forces in Operation Provide Comfort, flying patrols over northern Iraq. After a 189-day deployment, with 176 days at sea, Theodore Roosevelt returned to Norfolk on 28 June 1991. On 14 February 1992, the ship won her second Battle “E”. This was followed by the award of the Battenberg Cup for 1991 as the Atlantic Fleet’s premier ship. 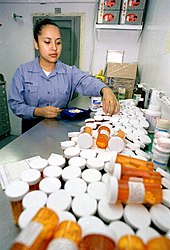 A U.S. Navy corpsman aboard USS Theodore Roosevelt in May 1999

USS Theodore Roosevelt began her third deployment on 11 March 1993, again with CVW-8 embarked. Also embarked was a Special Purpose Marine Air Ground Task Force (SPMAGTF), in a test the concept of embarking a multi-purpose Marine force in a carrier.

While the ship was still in the Virginia Capes operating area, President Bill Clinton flew aboard for several hours for his first visit to a U.S. Navy ship.

USS Theodore Roosevelt operated in the Adriatic as CVW-8 planes enforced Operation Deny Flight in the U.S. no-fly zone over Bosnia. In June, on the way to only her second port visit, USS Theodore Roosevelt was ordered instead to transit the Suez Canal en route to the Red Sea to participate in Operation Southern Watch, enforcing the no-fly zone over Iraq.

Deployed for 184 days, Theodore Roosevelt spent 169 days under way prior to return in September 1993. For the accomplishments of her crew, the ship received her second Meritorious Unit Commendation.

Theodore Roosevelt and CVW-8 began their fourth deployment in March 1995, operating in the Red Sea in support of Operation Southern Watch over Iraq, and Operations Deny Flight and Sharp Guard over the skies of Bosnia and in the Adriatic operating areas. Deny Flight evolved into Operation Deliberate Force, as CVW-8 aircraft led NATO strikes against strategic Bosnian Serb targets in Bosnia-Herzegovina. The USS Theodore Roosevelt Battle Group returned to Norfolk, Virginia in September 1995 and was awarded the Navy Unit Commendation for its Bosnia operations.

Theodore Roosevelt deployed for her fifth deployment on 25 November 1996, with CVW-3 embarked, in support of Operation Southern Watch in the Mediterranean and Persian Gulf. The ship returned from deployment in May 1997.

From 1 February to 4 March 1999 Theodore Roosevelt participated in a large navy exercise called JTFEX / TMDI99 along with the Brazilian navy and several NATO navies. During the exercise USS Theodore Roosevelt was ‘sunk by the Dutch submarine HNLMS Walrus along with 8 other US ships, many of which were part of the carrier‍ ’​s escorts.

tbegan her sixth deployment on 26 March 1999 with CVW-8 embarked. They were immediately called to duty in the Ionian Sea to support NATO’s Operation Allied Force. USS Theodore Roosevelt and CVW-8 aircraft conducted air strikes for two months over the skies of Kosovo against the Serbians. TR and CVW-8 were then dispatched to support Operation Southern Watch, enforcing the “no-fly” zone over Southern Iraq. USS Theodore Roosevelt returned to her homeport of Norfolk, Virginia, on 24 September 1999.

USS Theodore Roosevelt got underway on 6 January for a scheduled month-long training period in the Puerto Rican Operating Area. Near the end of January, USS Theodore Roosevelt received orders to proceed across the Atlantic to the Mediterranean Sea. Strike Fighter Squadron 201, based at Naval Air Station Naval Air Station Joint Reserve Base Fort Worth, Texas, was ordered to active duty as a unit of Carrier Air Wing (CVW) 8, the first Naval Reserve squadron to deploy aboard an aircraft carrier since the Korean War.

USS Theodore Roosevelt in the Elizabeth River in 2004 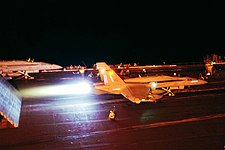 An F/A-18 Hornet from the “Sidewinders” of VFA-86 ignites its afterburners while preparing to be catapulted from the flight deck.

On 7 March 2007 USS Theodore Roosevelt began a nine-month Planned Incremental Availability (PIA) in Norfolk, which saw the addition of RAM missiles among other upgrades. The ship returned to Naval Station Norfolk on 28 November 2007.

CVW-8 and USS Theodore Roosevelt participated in Joint Task Force Exercise 08-4 Operation Brimstone off the coast of North Carolina between 21 and 31 July 2008. The British aircraft carrier HMS Ark Royal, the amphibious assault ship Iwo Jima with associated units and the Brazilian frigate Greenhalgh and the French submarine Améthyste also participated in the event.

USS Theodore Roosevelt left Norfolk on 8 September 2008 for a scheduled deployment to the Middle East with Carrier Air Wing Eight embarked. On 4 October 2008 the ship stopped at Cape Town, South Africa. This was the first visit to Cape Town by a nuclear-powered vessel since the German cargo ship Otto Hahn in the 1970s. Due to poor weather, approximately half of the ship’s crew was unable to go ashore on liberty. Much of the crew that made it ashore was unable to return to USS Theodore Roosevelt due to the increasingly poor weather. The remaining crew was forced to remain on the pier till morning alongside the cruiser USS Monterey. The ship made four subsequent port stops in Jebel Ali, UAE, including one during the Christmas holiday. CVW-8 and CVN-71 supported Operation Enduring Freedom and flew more than 3,100 sorties and dropped more than 59,500 pounds of ordnance while providing Close Air Support for ISAF-forces in Afghanistan.

On 21 March 2009 USS Theodore Roosevelt was relieved by Dwight D. Eisenhower. The carrier arrived at Norfolk on 18 April. On 26 August 2009 defense contractor Northrop Grumman was awarded a 2.4 billion dollar contract for Refueling and Complex Overhaul (RCOH) of USS Theodore Roosevelt at its Newport News shipyard, to be completed in 2013.

Flight testing for the X-47B continued on board USS Theodore Roosevelt on 10 November 2013. During this phase, the X-47B’s digitized carrier-controlled environment was tested which involved the interface between the unmanned aircraft and carrier personnel during launching, recovering, and flight operations. Such a digital environment offered increased flexibility and enhanced safety for carrier operations.

On 15 January 2014, the Navy announced that USS Theodore Roosevelt’​s home port would move to San Diego, replacing USS Ronald Reagan when to relocated to Japan sometime in 2015 as part of the US Navy’s preparation for the planned refueling of USS George Washington.

On 11 March 2015, the On 4 March 2015 it was reported in a blog spot of the French Navy and Defense Ministry that during a recent training exercise off Florida the French submarine Saphir as part of the “enemy” attack Carrier Strike Group departed Naval Station Norfolk for around the world tour with deployments to the U.S. 5th, 6th and 7th Fleets as part the first deployment of Naval Integrated Fire Control-Counter Air (NIFC-CA) Carrier Strike Group, before arriving in their new home port of San Diego, California.

Pictures and some Info courtesy of Wikipedia.org