The Surrender of the Empire of Japan

The Surrender of the Empire of Japan  was announced by Imperial Japan on August 15 and formally signed on September 2, 1945, bringing the hostilities of World War II to a close. By the end of July 1945, the Imperial Japanese Navy was incapable of conducting major operations and an Allied invasion of Japan was imminent. While publicly stating their intent to fight on to the bitter end, Japan’s leaders (the Supreme Council for the Direction of the War, also known as the “Big Six”) were privately making entreaties to the neutral Soviet Union to mediate peace on terms more favorable to the Japanese. Meanwhile, the Soviets were preparing to attack Japanese forces in Manchuria and Korea in fulfillment of promises they had secretly made. On August 6, 1945, the United States detonated an atomic bomb over the Japanese city of Hiroshima.

Late in the evening of August 8, 1945, in accordance with the Yalta agreements, but in violation of the Soviet–Japanese Neutrality Pact, the Soviet Union declared war on Japan, and soon after midnight on August 9, 1945, the Soviet Union invaded the Imperial Japanese puppet state of Manchukuo. 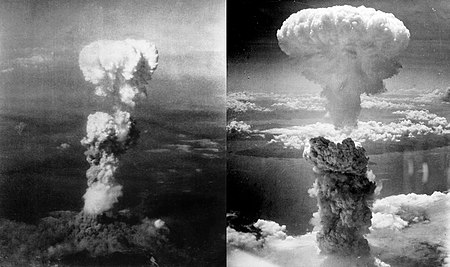 The United States dropped a second atomic bomb, this time on the Japanese city of Nagasaki. Following these events, Emperor Hirohito intervened and ordered the Supreme Council for the Direction of the War to accept the terms the Allies had set down in the Potsdam Declaration for ending the war. After several more days of behind-the-scenes negotiations and a failed coup d’état, Emperor Hirohito gave a recorded radio address across the Empire on August 15. In the radio address, called the Gyokuon-hōsō (“Jewel Voice Broadcast”), he announced the surrender of Japan to the Allies.