Map of the Siegfried line

The Siegfried Line was a defense system stretching more than 630 km (390 mi) with more than 18,000 bunkers, tunnels and tank traps. It went from Kleve on the border with the Netherlands, along the western border of the old German Empire as far as the town of Weil am Rhein on the border to Switzerland. More with Nazi propaganda in mind than for any strategic reason, Adolf Hitler planned the line from 1936 and had it built between 1938 and 1940.

Origin of the name Westwall

The origin of the name is unknown, but is likely from popular use from the end of 1938. Nazi propaganda did not initially use the term, but the name was well-known from the middle of 1939, as Hitler sent an “Order of the Day to the soldiers and the workers at the Westwall” on 20 May 1939. The official name for the line until then had changed several times depending on the phase of construction:

These programs were all pushed forward with the highest priority, using every resource available.

At the start of each construction program, basic construction prototypes were laid out on the drawing board and then built, sometimes by the thousands. This standardization of the bunkers (popularly known as Pillboxes) and tank traps was necessary because of the lack of raw materials, transport and workers.

Small bunkers were set up with three embrasures towards the front. The walls were 50 cm (20 in) thick. Soldiers stationed there did not have their own beds but had to make do with hammocks. In exposed positions, similar small bunkers were erected with small round armoured “lookout” sections on the roofs. The program was carried out by the Border Watch (Grenzwacht), a small military troop activated in the Rhineland immediately after it was re militarized. 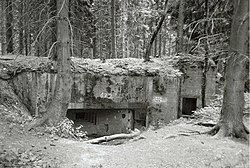 Type 10 Limes program bunker seen from the back.

The Limes Program began as a result of an order by Hitler to strengthen fortifications on the western German border. Bunkers built in this phase, starting in 1938, were more strongly constructed than the earlier border fortifications.

The bunkers had a ceiling and walls 1.5 m (4 ft 11 in) thick. A total of 3,471 Type 10 bunkers were built along the entire length of the Siegfried Line. The bunkers had a central room or shelter for 10-12 men with a stepped embrasures facing backwards and a combat section 50 cm (20 in) higher. This section had embrasures at the front and sides for machine guns. More embrasures were provided for carbines and the entire structure was constructed so as to be safe against poison gas.

The bunker was heated with a safety oven, and the chimney was covered with a thick grating. Every soldier was given a sleeping-place and a stool; the commanding officer had a chair. There was very little space: each soldier had about 1 m2 (11 sq ft) of space, which meant that the rooms were packed full.

Inside the bunkers of this type still remaining today are signs hung up to prepare the men for their task: “Walls have ears” or “Lights out when embrasures are open!”

The bunkers built under this program were similar to those of the Limes program: Type 107 double MG casemates with concrete walls up to 3.5 m (11 ft) thick. One difference was that there were no embrasures at the front, only at the sides of the bunkers. Embrasures were only built at the front in special cases and were then protected with heavy metal doors. The program included the towns of Aachen and Saarbrücken which were initially west of the Limes Program defensive line.

The Western Air Defense Zone (Luftverteidigungszone West or LVZ West) continued parallel to the two other lines toward the east, and consisted mainly of concrete FlaK foundations. Scattered MG42s and MG34s were also placed for additional defense, against both air and land targets. Flak turrets were designed to force enemy planes to fly higher, thus decreasing the accuracy of their bombing. These towers were protected at close range by bunkers from the Limes and Aachen-Saar program

The Geldern Emplacement lengthened the Siegfried Line northwards as far as Kleve on the Rhine, and was built after the start of World War II. The Siegfried Line originally ended in the north near Brüggen in the Viersen district. The primary constructions were unarmed dugouts which were extremely strongly built out of concrete. For camouflage they were often built near farms.

Tank traps were also built for miles along the Siegfried Line and were known as “dragon’s teeth” or “pimples” (in German Höcker, “humps”) because of their shape. These blocks of reinforced concrete stand in several rows on a single foundation. There are two typical sorts of barrier: Type 1938 with four teeth getting higher toward the back, and Type 1939 with five such teeth. Many other irregular lines of teeth were also built. Another design of tank obstacle was made by welding together several bars of steel in such a way that any tank rolling over it would be penetrated in its weak bottom armor. If the lie of the land allowed it, water-filled ditches were dug instead of tank traps. An example of this kind of defense are those north of Aachen near Geilenkirchen.

The early fortifications were mostly built by private firms, but the private sector was not able to provide the number of workers needed for the program that followed. This gap was filled by the Todt Organisation. With this organization’s help, huge numbers of workers — up to 500,000 at a time — were found to work on the Siegfried Line. Transport of materials and workers from all across Germany was managed by the Deutsche Reichsbahn railway company, which took advantage of the well-developed strategic railway lines built on Germany’s western border in World War I.

Working conditions were highly dangerous; for example, the most primitive means had to be used to handle and assemble extremely heavy armor plating weighing up to 60 tons (66 short tons). Life on the building site and after work was monotonous and many people gave up and left. Most workers received a medal depicting a bunker for their service.

Pictures and some info courtesy of Wikipedia.com