The Korean War was a war fought in Korea between armies from North Korea and from South Korea. The war began on 4:30 AM on June 25, 1950 and fighting stopped July 27,1953. More than two million Koreans died, most of them in the north.
Both sides blame each other for starting the war. The north, led by communist Kim Il-Sung, was helped mostly by People’s Republic of China, and the USSR. The south, led by nationalist Syngman Rhee, was helped by many countries in the United Nations, and especially by the United States. The war ended with a truce. South Korea and North Korea are still officially at war, and the United States still keeps troops in South Korea, in case North Korea ever invades again. North and South Korea are divided by the 38th parallel.

In 1910, Japan put Korea under Japanese rule and was still ruling Korea when World War Two ended. When Japan surrendered, the United States and the USSR agreed to split Korea into two temporary occupation zones with USSR occupying the North and USA occupying the South. This was, at first, to be for a short time.

At the Moscow Conference of the Council of Foreign Ministers in December 1945, the United States and USSR agreed on Korea having a provisional government (a temporary government set up quickly before a real government is ready). This became difficult because of the growing Cold War (see next cause).

The Cold War was an important cause in The Korean War . Relations between the two occupying powers were bad and when China became Communist in October 1949, the President of the USA, Harry Truman, was very worried that other countries around China may also become Communist, such as Japan. The American Army was about one twelfth the size of five years earlier and Joseph Stalin had recently lost a Cold War dispute over the Berlin Blockade and subsequent airlift. 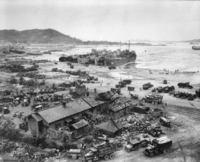