The Insanely Powerful AC-130, Here you have several versions of the US AC-130: The AC-130U Spooky, and the AC-130W Stinger II, while in action during live fire exercise as part of the Emerald Warrior 2016 annual exercise in Hurlburt Field, Florida. The equipment use here: the GAU-12 Equalizer 25mm (for the AC-130U) cannons, 30 mm Bushmaster cannons (for the W version), Bofors 40 mm auto cannons, and 105mm M102 cannon. The Lockheed AC-130 gunship is a heavily armed, long-endurance ground-attack variant of the C-130 Hercules transport fixed-wing aircraft. It carries a wide array of anti-ground oriented weapons that are integrated with sophisticated sensors, navigation, and fire-control systems. Unlike other military fixed-wing aircraft, the AC-130 relies on visual targeting. Because its large profile and low operating altitudes (around 7,000 ft.) make it an easy target, it usually flies close air support missions at night.

The airframe is manufactured by Lockheed Martin, while Boeing is responsible for the conversion into a gunship and for aircraft support. Developed during the Vietnam War as ‘Project Gunship II’, the AC-130 replaced the Douglas AC-47 Spooky, or ‘Gunship I’. The sole operator is the United States Air Force, which uses the AC-130U Spooky and AC-130W Stinger II variants for close air support, air interdiction, and force protection, with the AC-130J Ghostrider in development. Close air support roles include supporting ground troops, escorting convoys, and urban operations. Air interdiction missions are conducted against planned targets and targets of opportunity. Force protection missions include defending air bases and other facilities. AC-130Us are based at Hurlburt Field, Florida, while AC-130Ws are based at Cannon AFB, New Mexico; gunships can be deployed worldwide. The squadrons are part of the Air Force Special Operations Command (AFSOC), a component of the United States Special Operations Command (SOCOM).

The AC-130 has a non-pressurised cabin, with the weaponry mounted to fire from the port side of the fuselage. During an attack, the gunship performs a pylon turn, flying in a large circle around the target, therefore being able to fire at it for far longer than in a conventional strafing attack. The AC-130H Spectre was armed with two 20 mm M61 Vulcan cannons, one Bofors 40 mm autocannon, and one 105 mm M102 cannon; after 1994, the 20 mm cannons were removed for most missions. The upgraded AC-130U Spooky has a single 25 mm GAU-12 Equalizer in place of the Spectre’s twin 20 mm cannons, an improved fire control system, and increased ammunition capacity. New AC-130Js based on the MC-130J Combat Shadow II special operations tanker were planned as of 2012. The AC-130W is armed with one 30 mm Bushmaster cannon, AGM-176 Griffin missiles, and GBU-39 Small Diameter Bombs (SDBs).

During the Vietnam War, the C-130 Hercules was selected to replace the Douglas AC-47 Spooky gunship (Project Gunship I) in order to improve mission endurance and increase capacity to carry munitions. Capable of flying faster than helicopters and at high altitudes with excellent loiter time, the use of the pylon turn allowed the AC-47 to deliver continuous accurate fire to a single point on the ground. 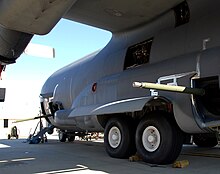 In 1967, JC-130A USAF 54-1626 was selected for conversion into the prototype AC-130A gunship (Project Gunship II). The modifications were done at Wright-Patterson Air Force Base by the Aeronautical Systems Division. A direct view night vision telescope was installed in the forward door, an early forward looking infrared (FLIR) in the forward part of the left wheel well, and Gatling guns fixed facing down and aft along the left side. The analog fire control computer prototype was handcrafted by RAF Wing Commander Tom Pinkerton at the USAF Avionics Laboratory at Wright-Patterson AFB. Flight testing of the prototype was performed primarily at Eglin Air Force Base, followed by further testing and modifications. By September 1967, the aircraft was certified ready for combat testing and was flown to Nha Trang Air Base, South Vietnam for a 90-day test program. The AC-130 was later supplemented by the AC-119 Shadow (Project Gunship III), which later proved to be underpowered.

Seven more warplanes were converted to the “Plain Jane” configuration like the AC-130 prototype in 1968, and one aircraft received the “Surprise Package” equipment in 1969. Surprise Package included the latest 20 mm rotary cannons and 40 mm Bofors cannon but no 7.62 mm close support armament. Surprise Package served as a test bed for the avionic systems and armament for the AC-130E.

In 1970, ten more AC-130As were acquired under the “Pave Pronto” project. In the summer of 1971, Surprise Package equipped AC-130s were converted to the Pave Pronto configuration and assumed their new nickname ‘Thor’. Conversion of C-130Es into AC-130Es for the “PAVE Spectre” project followed.

By 2018, AC-130 gunships will have been providing close air support for special operators for 50 years. Although the aircraft have been kept relevant through constant upgrades to their weaponry, sensor packages, and countermeasures, they are not expected to be survivable in future non-permissive environments due to their high signatures and low air speeds. Military analysts, such as the Center for Strategic and Budgetary Assessments, have suggested that AFSOC invest in more advanced technologies to fill the role to operate in future contested combat zones, including a mix of low-cost disposable unmanned and stealthy strike aircraft.

Regardless of their project names the aircraft were more commonly referred to by the squadron’s call sign ‘Spectre’.

for a more detailed look into the Spectre Gunship go HERE