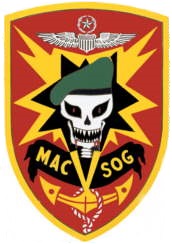 STEMMA DEL MACVSOG.jpg Never assigned an official crest or patch, SOG personnel accepted this unofficial self-designed insignia Active 24 January 1964 – 1 May 1972 Country United States Type Joint unconventional warfare task force Role Strategic reconnaissance, covert action, psychological warfare Military Assistance Command, Vietnam – Studies and Observations Group (MACV-SOG) was a highly classified, multi-service United States special operations unit which conducted covert unconventional warfare operations prior to and during the Vietnam War. Established on 24 January 1964, the unit conducted strategic reconnaissance missions in the Republic of Vietnam (South Vietnam), the Democratic Republic of Vietnam (North Vietnam), Laos, and Cambodia; carried out the capture of enemy prisoners, rescued downed pilots, and conducted rescue operations to retrieve prisoners of war throughout Southeast Asia; and conducted clandestine agent team activities and psychological operations. The unit participated in most of the significant campaigns of the Vietnam War, including the Gulf of Tonkin incident which precipitated increased American involvement, Operation Steel Tiger, Operation Tiger Hound, the Tet Offensive, Operation Commando Hunt, the Cambodian Campaign, Operation Lam Son 719, and the Easter Offensive. The unit was formally disbanded and replaced by the Strategic Technical Directorate Assistance Team 158 on 1 May 1972. Foundation The Studies and Observations Group (aka SOG, MACSOG, and MACV-SOG) was a joint unconventional warfare task force created on 24 January 1964 by the Joint Chiefs of Staff as a subsidiary command of the Military Assistance Command, Vietnam (MACV). The unit would eventually consist primarily of personnel from the United States Army Special Forces, the United States Navy SEALs, the United States Air Force, the Central Intelligence Agency (CIA), and elements of the United States Marine Corps Force Reconnaissance units. The Special Operations Group (as the unit was initially titled) was in fact controlled by the Special Assistant for Counterinsurgency and Special Activities (SACSA) and his staff at the Pentagon.a This arrangement was necessary since SOG needed some listing in the MACV table of organization and the fact that MACV’s commander, General William Westmoreland, had no authority to conduct operations outside territorial South Vietnam. This command arrangement through SACSA also allowed tight control (up to the presidential level) of the scope and scale of the organization’s operations. The mission of the organization was “to execute an intensified program of harassment, diversion, political pressure, capture of prisoners, physical destruction, acquisition of intelligence, generation of propaganda, and diversion of resources, against the Democratic Republic of Vietnam.” These operations (OPLAN 34-Alpha) were conducted in an effort to convince North Vietnam to cease its sponsorship of the communist insurgency in South Vietnam. Similar operations had originally been under the purview of the CIA, which had carried out the emplacement of agent teams in North Vietnam using air drops and over-the-beach insertions. Under pressure from Secretary of Defense Robert S. McNamara, the program, along with all other agency para-military operations, was turned over to the military in the wake of the disastrous Bay of Pigs Invasion operation in Cuba.