Long-range reconnaissance patrol or LRRPs (pronounced “Lurps”), are small, heavily armed long-range reconnaissance teams that patrol deep in enemy-held territory. The concept of scouts date back to the origins of warfare itself, however, in modern times these specialized units evolved from examples such as the Long Range Desert Group and Special Air Service in the Western Desert Campaign and North West Europe and similar units such as Force 136 in the Far East during the Second World War. The Finnish Army developed the concept separately on the Karelian Front of World War II from 1941 to 1944.

Postwar role was carried in various NATO and British Commonwealth countries by units that that could trace their origins to these wartime creations such as the SAS Regiments of the UK, Australia and New Zealand, 1er RPIMa, GCP, Groupement de Commandos Mixtes Aéroportés in France and the United States Army Rangers.

As indicated, the use of scouts is ancient, however, during the French and Indian War (1754-1763), the techniques of long-range reconnaissance and raiding were significantly implemented by the British in colonial America. The British employed the American Major Robert Rogers to make long-range attacks against the French and their Indian allies along the frontiers of the British colonies and New France. The achievements of Major Roberts’ dozen companies of approximately 1,200 men during the French and Indian War were so extraordinary that his doctrine, “Standing Orders, Rogers’ Rangers,” 1759, became the cornerstone of future U.S. Army Long-range Reconnaissance Patrol units, including the U.S. Army Rangers, and indeed, the Special Operations light infantry community.

Since satellite communications were a thing of the future, one of the most daring long-range penetration operations of the war was launched by members of the 1st Air Cavalry Division’s, long-range reconnaissance patrol, against the North Vietnamese Army when they seized “Signal Hill” the name attributed to the peak of Dong Re Lao Mountain, a densely forested 4,879-foot mountain, midway in A Shau Valley, so its 1st and 3rd Brigades, who would be slugging it out hidden deep behind the towering wall of mountains, could communicate with Camp Evans near the coast or with approaching aircraft. 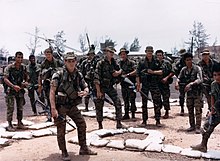 The US Marine Corps also performed long-range reconnaissance missions typically assigned to Marine Recon, especially Force Recon at the corps-level (i.e., Marine Expeditionary Force (MEF)) level, as opposed to the Battalion Recon units answering to battalion commanders.  A Marine Recon team typically was twice as large as Army Long-range reconnaissance patrol and was more heavily armed, however, sacrificing a degree of stealth.The tactical employment of a  was later evaluated to be generally used far too dangerously by commanders, who were pleased by the kill ratios of LRRPs teams (reported as high as 400 enemy troops for every LRRP killed). Writes one commentator: “During the course of the war Lurps conducted around 23,000 long-range patrols, of this amount two-thirds resulted in enemy sightings.” LRRPs also accounted for approximately 10,000 enemy KIA through ambushes, air strikes, and artillery.

In February 1969, all US Army LRRP units were folded into the newly formed 75th Infantry Regiment (Ranger), (a predecessor of the 75th Ranger Regiment), bringing back operational Ranger units for the first time since the Korean War. The Army had disbanded Ranger units after Korea, but kept Ranger School, on the premise that spreading Ranger School graduates throughout the Army would improve overall performance.