Josh Wege goes from near-death in Afghanistan to new life as softball player,  On a rocky roadside in Afghanistan, 19-year-old Josh Wege felt the sun staring directly down on him from a cloudless sky. He was groggy, bloody and could sense “all the chaos I was enveloped in”. 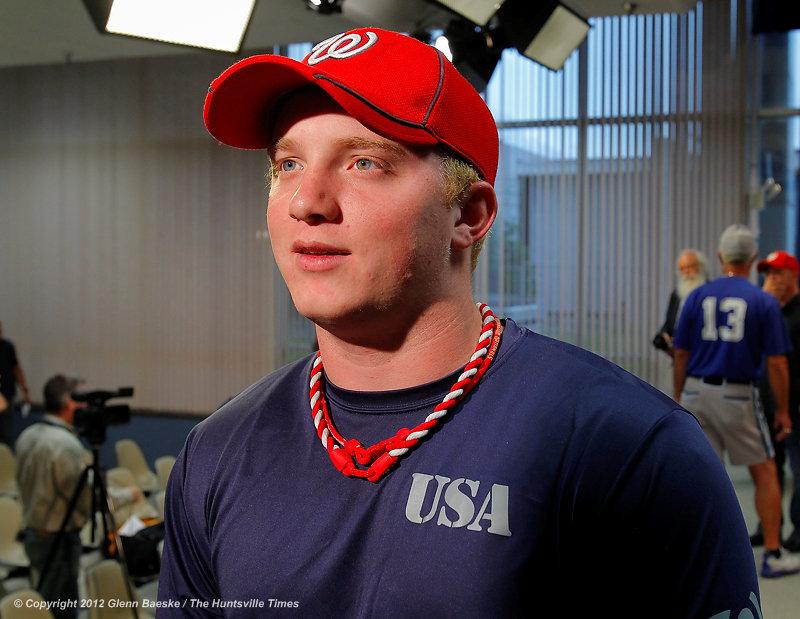 It was Oct. 4, 2009. Wege, a Marine lance corporal, was on “routine patrol” with his colleagues, heading out to resupply the Afghan police officers who were training with them. There is no such thing as “routine patrol” in Afghanistan.

Their light armored vehicle rumbled over a 200-pound IED that had been buried four feet underground and finally erupted.

“I happened to be the victim it chose,” Wege said.

As he woke up, he couldn’t feel his legs. They were “just shredded.” His pants were a bloody mess. A corpsman was already tending to him.

“Your life does flash by,” he said. “Some of the weirdest things were going through my head. Like I had just bought a stick-shift car and I thought, ‘How am I going to drive without my feet?’ You think a million things, like ‘Is this what it’s like to die in the movies?’ “

Of the million thoughts, none was that two-plus years later he’d be playing 20 softball games a month.

Or that he’d hook up with a bunch of other mangled, relentlessly optimistic, astounding ex-jocks who like to cling to the philosophy that they’re “not handicapped, but handi-capable.”

Guys who, as teammate Matt Kinsey said, “got our second chance to be athletes.”

Wege, a bilateral amputee below both knees, and Kinsey, still an active duty member of the U.S. Army who lost his right foot in Afghanistan, are members of the Wounded Warrior Amputee Softball Team. They joined coach David Van Sleet in Huntsville on Thursday to promote a series of three games here next month.

The appearance will be, as Mayor Tommy Battle said, “the exclamation point to (Armed Forces) week.”

The WWAST – ah, military and acronyms – will play a Friday, June 15 doubleheader beginning at 5, against a Redstone Arsenal team, then an all-star club of senior players. The next day at 4, it plays a City of Huntsville squad.

All games will be at the Kiwanis Softball Multiplex and admission is free. InDyne was announced Thursday as the presenting sponsor. The Huntsville Sports Commission is staging the event.

Those may only be half the softball games Wege plays that week. He is in three recreational softball leagues as well as on the twice-monthly WWAST tour.

He was a versatile athlete in his small hometown, Campbellsport, Wis. Said Wege, “If it was round, I was playing it.” He was the left fielder and captain of his high school baseball team, though he stood only 5-foot-7.

(According to Van Sleet, the team travels with $2 million worth of prosthetics; tack on $35,000 worth of equipment donated by Louisville Slugger, he said with some chagrin, “We’re not quite as good as our equipment.”)

“It’s amazing to watching these guys,” Wege said of his teammates. “It’s a hurdle to jump over. These prosthetics do hinder you. But we still play good softball. Everybody has a different way to adapt.”

In a way, though, its about how softball has helped them adapt to their own realities, as much as it is these players adapting to the game.

“As amputee, you have to set goals every week,” Wege said. “You had to find new things to do. I always wanted to push myself.”

Wege had “an awesome support structure” when he returned from Afghanistan. His twin brother, Joe, moved in with him. It brought a sense of normalcy.

Except for a brief patch of self-pity that now almost embarrasses him to recall, Wege threw himself into recovery. He went to Walter Reed Military Hospital for rehab, and his competitive juices really kicked in. He’d compare himself and his recovery to others.

“I wanted to walk better. I wanted to look normal in pants. It became a competition,” he said.

Eventually, two inches taller, a year older and substantially wiser, he could “look back from when I was in the hospital. ‘And I realized I was me. I was Josh again.”

Even with some new spare parts, he was whole again. And, soon enough, home again, on a softball field.

U.S. Marine Lance Cpl. Joshua Wege ( left) from Campbellsport, Wis., wins the gold medal in the Mens 200 Meter Dash with Lower Body Disability during the 2011 Warrior Games at the Garry Berry Stadium in Colorado Springs, Colo., May 17. U.S. Army, Marine Corps, Navy and Coast Guard, Air force and Special Forces will compete against one another in various events over a period of five days.