History and Mission of the Veterans of Foreign Wars Posts

History and Mission of the Veterans of Foreign Wars Posts.  The VFW name was created on September 17, 1914 at a conference at the Schenley Hotel in Pittsburgh, Pennsylvania. The new organization was a merger of two prior veterans organizations, both beginning in 1899: The American Veterans of Foreign Service and the National Society of the Army of the Philippines. The former was formed for veterans of the Spanish–American War, while the latter was formed for veterans of the Philippine–American War. 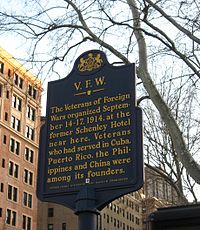 Historic marker commemorating the founding of the VFW in Pittsburgh.

On May 28, 1936, by an act of the United States Congress, the VFW became a government-chartered non-profit organization.  As such, it receives no funding from United States tax receipts and is supported by charitable donations.

VFW works on behalf of American veterans by lobbying Congress for better veterans’ health care and benefits. The VFW also maintains a nationwide organization of employees and volunteers to assist veterans with their VA disability claims.

VFW also donates much money and lots of hours for work for the city. One of their most popular programs provides free phone calls to overseas active military members.

Cross of Malta of the Veterans of Foreign Wars

The entire seal and title rests atop an eight-pointed Maltese cross. The golden rays of the Sun extend between the cross. The sun’s rays, the Cross, the Seal, and the title together symbolize the oaths, purpose and character of the men and women who at one time traveled far from their homes and steered into danger in the name of country and freedom.

The logo denotes the nature of the organization: American Combat Veterans of Foreign Wars engaged in fraternal, patriotic, historical and educational activities.

The background of the VFW logo draws on the particularly symbolic Maltese cross, which enjoys a rich history that dates back nearly 1,000 years.

The original cross of Malta dates to the High Middle Ages and was used by the Knights Hospitaller who traveled far from their homes to the Middle East to fight for their faith.

The knights represented all walks of life and regardless of their differences, they were united by their vows and their order. They fought their enemies, assisted pilgrims to the Holy Land, administered to the sick the needy and to the poor.

In those times, the Knights Hospitaller adopted the Cross of Malta as their insignia.

Over the centuries, the meaning of the eight points on the cross has come to have multiple meanings.

In modern times, the Venerable Order of St John’s main service organization, St John Ambulance, has also applied a parallel secular meanings to the points as representing the traits of a good first aider.

The VFW logo embraces and acknowledges a continuing brotherhood of soldiers who have fought on foreign soils since antiquity and modernizes it to focus on the core tenets that are central to its American members: democracy, freedom and justice represented by the Great Seal of the United States of America and given life by the members.

Direct community involvement is a VFW priority, extending beyond the realm of veterans helping fellow veterans.

VFW’s Community Service programs are designed to encourage community service and increase civic pride, which ultimately enhances education, improves the environment, and ensures the availability of health services for veterans.

VFW’s Citizenship Education program is designed to stimulate interest in America’s history and traditions and to promote citizenship, civic responsibility, and patriotism.

VFW’s Youth Scholarship programs provide more than $3.5 million in scholarships to our nation’s youth. They include Voice of Democracy, Patriot’s Pen youth essay contest, and Scout of the Year.

The VFW’s partnership with the Boy Scouts of America includes sponsoring more than 1,200 Scouting units with 40,000 members across the nation.

The VFW National Home for Children is a community development in a family-like environment that is home to orphaned or single parent children of VFW or Ladies Auxiliary members. The home, which was established in 1925 on 160 acres in Eaton Rapids, Michigan, emphasizes the values of education, good work habits, and sound moral character.

The Tomb of the Unknown Soldier
2nd Battalion 34th Armor