Armed Forces Day is a national observance in the United States on the third Saturday of May each year. 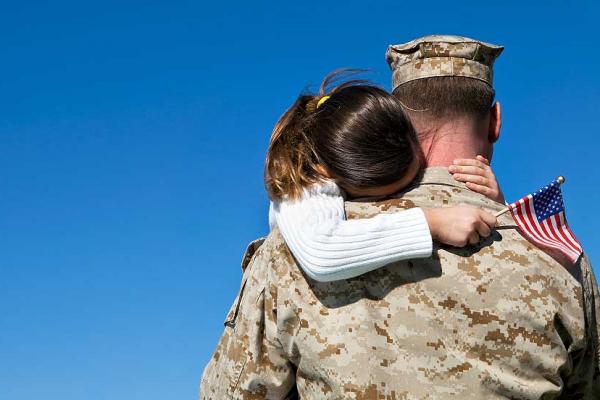 A member of the US armed forces hugs his daughter.©iStockphoto.com/videodet

What do people do?

Many events across the United States take place on Armed Forces Day to honor Americans in uniform who served their country in times of war and peace. Those who are honored on this day include people who serve the Army, Navy, Marines, Air Force and Coast Guard. National Guard and Reserve units may celebrate Armed Forces Day/Week over any period in May because of their unique training schedules. Events and activities may include:

Certain types of music are also played at Armed Forces Day events, including at memorials and at cemeteries, as a way to respect those in the armed forces who died for their country. For example, buglers have played a bugle call, known simply as Taps, on Armed Forces Day in recent years. Taps is usually sounded by the United States military at events such as flag ceremonies, memorial services and funerals.

Traffic and parking may be affected in areas where large-scale events are held for Armed Forces Day.

On August 31, 1949, Louis Johnson, who was the United States’ Secretary of Defense, announced the creation of an Armed Forces Day to replace separate Army, Navy and Air Force Days. The event stemmed from the armed forces’ unification under one department – the Department of Defense. The Army, Navy and Air Force leagues adopted the newly formed day. The Marine Corps League declined to drop support for Marine Corps Day but supports Armed Forces Day too.

The first Armed Forces Day was celebrated on Saturday, May 20, 1950. The theme for that day was “Teamed for Defense”, which expressed the unification of all military forces under one government department. According to the U.S. Department of Defense, the day was designed to expand public understanding of what type of job was performed and the role of the military in civilian life.

Armed Forces Day was a day for the military to show “state-of-the-art” equipment to Americans. It was also a day to honor and acknowledge Americans in the armed forces. Parades, open houses, receptions and air shows were held at the inaugural Armed Forces Day.  Armed Forces Day is still celebrated nationwide today and is part of Armed Forces Week.

Posters and other material used to promote Armed Forces Day often show images of Americans in the armed services dressed in their uniforms. Some posters show a collage of images, including images of those in the armed forces with their families or friends, as well as the United States Flag.