(formally the Truck, 1/4 ton, 4×4) and the Ford GPW were manufactured from 1941 to 1945. These small four-wheel drive utility vehicles are considered the iconic World War II, and inspired many similar light utility vehicles over the years, the World War II Jeep later evolved into the “C J” civilian Jeep. Its counterpart in the German army was the Volkswagen Kübelwagen, first prototyped in 1938, also based on a small automobile, but which used an air-cooled engine and lacked four-wheel drive.

Even though the world had seen widespread mechanisation of the military during World War I and the United States Army had already used four-wheel drive trucks in it, supplied by the Four Wheel Drive Auto Co. (FWD), by the time World War II was dawning, the United States Department of War were still seeking a light, cross-country reconnaissance vehicle.

As tensions were heightening around the world in the late 1930s, the U.S. Army asked American automobile manufacturers to tender suggestions to replace its existing, aging light motor vehicles, mostly motorcycles and sidecars but also some Ford Model T’s] This resulted in several prototypes being presented to army officials, such as five Marmon-Herrington 4×4 Fords in 1937, and three Austin roadsters by American Bantam in 1938 (Fowler, 1993). However, the U.S. Army’s requirements were not formalized until July 11, 1940, when 135 U.S. automotive manufacturers were approached to submit a design conforming to the army’s specifications for a vehicle the World War II technical manual TM 9-803 described as “… a general purpose, personnel, or cargo carrier especially adaptable for reconnaissance or command, and designated as 1/4-ton 4×4 Truck.”

By now the war was under way in Europe, so the Army’s need was urgent and demanding].   Bids were to be received by July 22, a span of just eleven days. Manufacturers were given 49 days to submit their first prototype and 75 days for completion of 70 test vehicles. The Army’s Ordnance Technical Committee specifications were equally demanding: the vehicle would be four-wheel drive, have a crew of three on a wheelbase of no more than 75 (later 80) inches and tracks no more than 47 inches, feature a fold-down windshield, 660 lb payload and be powered by an engine capable of 85 ft·lb (115 N·m) of torque. The most daunting demand, however, was an empty weight of no more than 1,300 lb (590 kg).

Only two companies entered: American Bantam Car Company and Willys-Overland Motors. Though Willys-Overland was the low bidder, Bantam received the bid, being the only company committing to deliver a pilot model in 49 days and production examples in 75. Under the leadership of designer Karl Probst, Bantam built their first prototype, dubbed the “Blitz Buggy” (and in retrospect “Old Number One”), and delivered it to the Army vehicle test center at Camp Holabird, Maryland on September 23, 1940. This presented Army officials with the first of what eventually evolved into the World War II U.S. Army Jeeps: the Willys MB and Ford GPW. 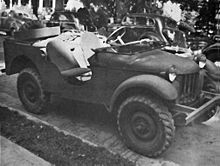 The Bantam no.1 ‘Blitz Buggy’

Since Bantam did not have the production capacity or fiscal stability to deliver on the scale needed by the War Department, the other two bidders, Ford and Willys, were encouraged to complete their own pilot models for testing. The contract for the new reconnaissance car was to be determined by trials. As testing of the Bantam prototype took place from September 27 to October 16, Ford and Willys technical representatives present at Holabird were given ample opportunity to study the vehicle’s performance. Moreover, in order to expedite production, the War Department forwarded the Bantam blueprints to Ford and Willys, claiming the government owned the design. Bantam did not dispute this move due to its precarious financial situation. By November 1940, Ford and Willys each submitted prototypes to compete with the Bantam in the Army’s trials. The pilot models, the Willys Quad and the Ford Pygmy, turned out very similar to each other and were joined in testing by Bantam’s entry, now evolved into a Mark II called the BRC 60. By then the U.S. and its armed forces were already under such pressure that all three cars were declared acceptable and orders for 1,500 units per company were given for field testing. At this time it was acknowledged the original weight limit (which Bantam had ignored) was unrealistic, and it was raised to 2,160 pounds (980 kg).

For these respective pre-production runs, each vehicle received revisions and a new name. Bantam’s became the BRC 40, and the company ceased motor vehicle production after the last one was built in December 1941. After reducing the vehicle’s weight by 240 pounds, Willys’ changed the designation to “MA” for “Military” model “A”. The Fords went into production as “GP”, with “G” for a “Government” type contract and “P” commonly used by Ford to designate any passenger car with a wheelbase of 80 inches

By July 1941, the War Department desired to standardize and decided to select a single manufacturer to supply them with the next order for another 16,000 vehicles. Willys won the contract mostly due to its more powerful engine (the “Go Devil”) which soldiers raved about, and its lower cost and silhouette. The design features the Bantam and Ford entries had which were an improvement over Willys’ were then incorporated into the Willys car, moving it from an “A” designation

to “B”, thus the “MB” nomenclature. Most notable was a flat wide hood, adapted from Ford GP.

By October 1941, it became apparent Willys-Overland could not keep up with production demand and Ford was contracted to produce them as well. The Ford car was then designated GPW

This one of the early 4×4’s. It was designed by Willys Overland during WWII and made by a contract to Willys. Willys renamed the truck Jeep after the war. The Ford GPW military truck is almost identical to the Willys truck. Only the grill is a little bit different with more ribs and smaller headlights. During WWII Ford factories produced the military truck using Willys design drawings with minor modifications. The tires are somewhat smaller than today’s trend.  The engine is a four cylinder flat head Ford with a 6 volt electrical system. The magnificent dashboard! All the luxury stuff like manually operated wipers, three gears, the first one unsynchronized. The small handle closer to the driver is for engaging the front drive. The other handle changes between high, nautral and low.

Icelanders began using 4×4’s in the fifties for travel and outdoor enjoyment. It can be said that the military jeeps (like this one) are the seeds for the type of wheeling we do now. The power plant, not too much complex computer stuff to break down. The passenger area offers excellent comfort in all weather! Rear floating axles are apparently nothing new. The gas tank is located under the driver’s seat. The tank you can see extending below the truck is a water container. The HANDLES at each corner of the truck and the center sides are for LIFTING the truck out of tough situations!

A further 13,000 (roughly) amphibian jeeps were built by Ford under the name GPA (nicknamed ‘Seep’ for Sea Jeep). Inspired by the larger DUKW, the vehicle was produced too quickly and proved to be too heavy, too unwieldy, and of insufficient freeboard. In spite of participating successfully in the Sicily landings (July 1943) most GPAs were routed to the U.S.S.R. under the Lend-Lease program. The Soviets were sufficiently pleased with its ability to cross rivers to develop their own version of it after the war, the GAZ-46.

M38
The Allied Invasion of Italy